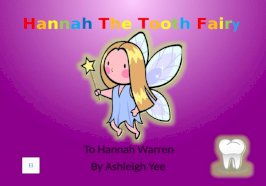 2. Once upon a time there was a girl who liked playing games , her name was Hannah. After dinner one night she decided to go to bed early. So she did.
3. The next day when Hannah woke up she had wings. They were so fluffy and white and very pretty. Since Hannah was a tooth fairy her first mission was to get the tooth and swap it with money. It was always a big dream of Hannahs to be a tooth fairy. She couldnt believe her dream came true.
4. When it was dark she flew across the sky. Then she saw the number of the house 88 Cherry pop Lane. She knew it was the right place. So before she went in she shrunk herself down.
5. When Hannah went in the house she saw a cat. So she hid behind a wall.
6. When the girl was asleep, she quietly went in and went under the pillow, to get the tooth. Then Hannah got the tooth and swapped it with money.
7. She saw a girl eating an apple. She was so excited because another tooth fell out. So she went to bed early so the tooth fairy would come.
8. When the girl woke up she looked under her pillow. She went to her mum and showed her the money. Wheres my tooth!
9. Then she realized. Of course the tooth fairy took it and swapped it with money. She couldnt wait until she lost another tooth. Hannah would be joyed to come to 88 Cherry pop Lane again.
10. The End!

The Birth Of The Tooth Fairy - How Craze Originated
Category: Documents

Where is the Tooth Fairy? - Virginia Department of · PDF...
Category: Documents